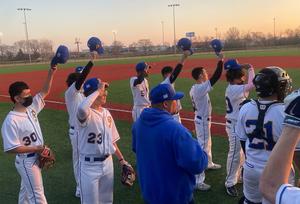 The Prosser Baseball season is underway and the Falcons are off to a strong start!
In the game on March 15, 2022, Alex Catalan didn't allow a single run against Noble Street College Prep, throwing a complete game shutout and leading the Falcons to a 14-0 victory. Koby Hightower drove in six runs, going 2-for-3 at the plate. Hightower drove in runs on a double in the first and a grand slam in the second. In the first inning. Ethan Velazquez singled on a 3-2 count, scoring one run. The Falcons tallied six runs in the second inning. Big bats were led by Anthony Sosa, Jacob Mendez and Koby Hightower. who all drove in runs. A double by #2 in the third inning was a positive for Noble Street College Prep, but Catalan led the Falcons to victory on the hill. The righty allowed one hit and zero runs over five innings, striking out 11.
The Falcons smacked one home run -- Hightower in the second inning -- and totaled ten hits in the game with  Sosa, Hightower and Dominique Mejia all collecting multiple hits. Sosa went 3-for-3 at the plate leading in hits. The Falcons were sure-handed and didn't commit a single error. Sosa made the most plays with 12, and the Falcons tore up the base paths, with three players stealing at least two bases and Catalan led the way with five.